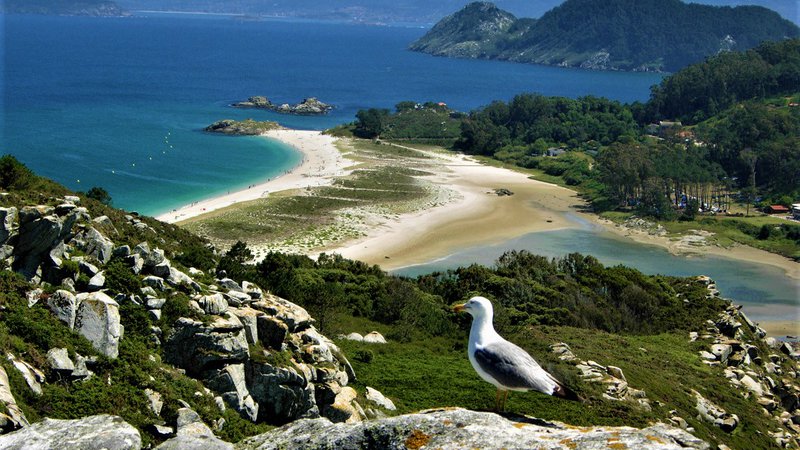 Sailing the Way of Saint James

Europe was made by going on pilgrimage to Compostela. (Johann Wolfgang von Goethe). Sail your way to Santiago

Getting to Santiago walking along the famous "Way" is undoubtedly the dream of many. Since the Middle Ages, arriving on a pilgrimage to the tomb of the Apostle James, in the cathedral of Santiago de Compostela in Galicia, has represented a challenge that strengthens the body and spirit. Leaving everything to embark on the journey is one of those things that many want to do at least once in their life, starting with what you can carry in your backpack bringing a map and little more is certainly an exciting adventure.

In the last decade the way has become increasingly popular, celebrated in books and films, it is now synonymous with freedom, change and renewal,  it attracts hundreds of thousands of pilgrims every year, believers and non-believers. In fact, faith is only one aspect of the journey. Obviously, for believers, the arrival in Santiago merges with faith and devotion to the Apostle, but the journey can be undertaken for various other reasons, even for sport and tourism only. The reasons for this success are in addition to the religious and personal reasons that trigger the departure, a millenary history that in many places generates legends, a rich cultural heritage with churches, monasteries, large and small cities with their monuments scattered along the various paths that lead to Santiago and not least the impetuous nature of Galicia, the region where the destination is located.

Galicia is a truly unique region, located in the north west of Spain and framed by the Atlantic Ocean on one side and green and lush mountains on the other. With a very variable climate, it is dotted with small towns and villages that are very different from each other: the coastal part with breathtaking views, with jagged cliffs, lighthouses and small ports overlooking the huge ocean. And the characteristic fjords, called "Rias" where the sea enters the land for miles and miles playing with the tides. The green mountains that preserve the vestiges of a past full of history, from the dolmens to the Roman 'castras' to the medieval churches that mark the way to Santiago. The cuisine is truly excellent with seafood that is unrivaled in the world and some that can only be found in Galicia such as the famous "percebes" combined with wines, especially well-made whites such as Albarino. Even the land offers excellent products such as the typical smoked sausage the "chorizo".

There is not just one way to get to Santiago. There are many paths that cross Europe to get to the cathedral. The paths are normally well marked thanks to the “mojones”, stones that indicate the direction to follow with the now iconic yellow arrows and the shells symbolizing pilgrims with the distance to the arrival. The rule dictates that to obtain the Compostela, or plenary indulgence, you must travel a minimum of 100km on foot or on horseback, 200km will be necessary if you go by bike. But there is also another way to get to Santiago and get the Compostela, you can do it by sailboat. This pilgrimage is one of the oldest and most evocative in fact it contains the symbolism of the legend of the translation of the remains of the Saint who arrived on the shores of Galicia on a stone boat. There are also various routes to arrive by boat, we suggest, one of the most complete and characteristic is the one proposed by our partners SAILWAY departing from Vigo. You can choose between two options, one for 5 days and one for 6. In both cases, the boat route will be in the spectacular rias of Vigo with a stop to visit the beautiful Cies islands, within the natural park of the Atlantic islands, and Arousa with its characteristic ports, to end by navigating the ria of Mouros and Noia from where you continue walking to Santiago. In each port, you can stamp the pilgrim's credentials with the maritime authorities, which will give you the right to claim the Compostela once you arrive in the Cathedral at the pilgrim's office. Definitely a spectacular way do your Way, crossing places with the rough beauty typical of the Atlantic and, above all, aboard a sailboat. Look for SAILWAY offers on Boatsandgo, just search for the port of Vigo. Ask for a contact through the contact form after selecting the boat you like. You will quickly receive all the information relating to the available itineraries. Santiago awaits you !!

We use our own and third-party cookies to improve our services, compile statistical information and analyse your browsing habits. This allows us to customise the content we offer and to display advertising related to your preferences. By clicking on UNDERSTANDING YOU ACCEPT ITS USE USE. You can also CONFIGURE or REJECT the installation of Cookies. For MORE INFORMATION, click here.